This year we were very pleased to present The Dorothy Leatch Community award to Phil McInnis!

Phil MacInnis is a Parkdale organizer and resident of more than twenty years. Since 2016, the King Street storefront above which he lives has been sold twice. Back-to-back owners have tried to throw the tenants out. In both cases Phil organized his neighbours and beat the evictions.

The Dorothy Leatch Community Award is granted annually in memory of Dorothy Leatch who passed away in 2011. Dorothy was PCLS’ receptionist for more than 30 years. She took an active interest in the clients and in the community and selflessly contributed to the well-being of the community. This award is a tribute to her while recognizing a community member in Parkdale and Swansea who embodies Dorothy’s own approach to community. 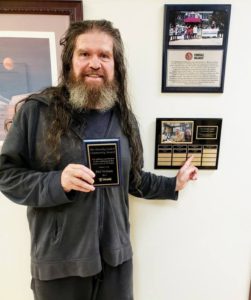